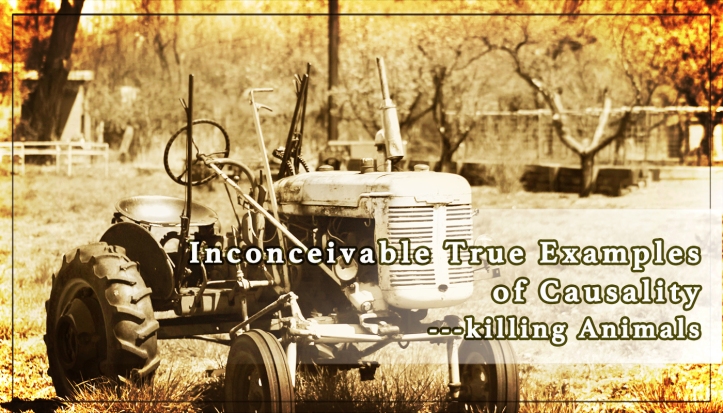 My family name is Chen. I live in Chiayi, Taiwan. Recently, I have heard about some stories of people cruelly killing animals and then encountering horrible retributions. I have no way to forget them from my memory. Therefore, I wanted very much to put these incidents into writing, to cause people in the world to raise their vigilance.

The first one was told recently by a friend of mine living in Sihu. It was about a deceased old farmer who was his next-door neighbor. While he was alive and making living from farming in the past, he often spread his harvested grains in his yard to dry under the sun. Sometimes, chickens and ducks of his neighbors came to eat the grains. This farmer was very furious to see that and immediately used a bamboo stick to expel them. However, the chickens and ducks still came to steal the food when he was not around. Due to his anger, this neighbor used a big fishing net to catch the chickens and ducks which stole food. Whenever he caught any of them, this farmer would break one leg of each of them by brutal force. Thus, those chickens and ducks would be in a miserable state of unable to walk. Since he was using such cruel means, many people tried to persuade him not to crucify animals in this way. However, he was still stubbornly indifferent and continued his acts. No one could have imagined that a few years later, this farmer was suddenly no longer able to walk. His two feet started to swell and then the muscles began to putrefy. The tremendous pain that he was experiencing often caused him to scream miserably. Although he looked for treatment everywhere and even tried to seek help from divination and other alternatives of spiritual power, there seemed to be no effect from any of these. He suffered in such torment for six years or more before he passed away.

According to many neighbors, during the last several months of his life, the farmer often shouted while on his sickbed, “Shoo! Shoo!” Meanwhile, his hands were also making the movement of pushing animals away. When people asked what he was doing, he said that he “saw” a group of chickens and ducks with broken legs coming and surrounding him. Moreover, each of them used its sharp and hard beak to hit and bite his legs, causing the skin and muscle on his legs to break and bleed and bringing him tremendous pain. That was why he had to often wave his hands and shout loudly to try to get rid of them. Unfortunately, such efforts were all futile and useless. Not long after, this farmer ended his miserable life under the torment of such pain and suffering.